Forrester's Hyde is the modest seat of House Forrester in the Wolfswood. They are a minor Northern house sworn to House Glover of Deepwood Motte . The Forresters are hard and stoic, like most Northerners, and their isloated position in the Wolfswood makes them mistrustful of outsiders. The longhall houses the entirity of their small workforce of farmhands and the Forresters themselves. The outpost provides simple fare and cheap wood for passing traders and merchants.

Forrester's Hyde was built over a few days in the months of December 2013 and January 2014 by builder OllieDisc as a sub-project within the overproject of House Glover of Deepwood Motte and the Wolfswood, posted by builders JustCallMeJack and Starcat98.

The main inspiration for the style of the build was the generic Nordic longhall, while the style was developed from the Westeroscraft Northern Style Guide  and existing builds in the North. 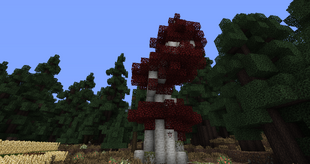 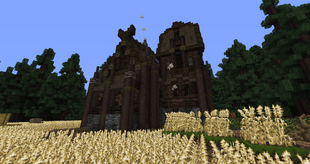 The longhall and stair tower, surrounding by fields 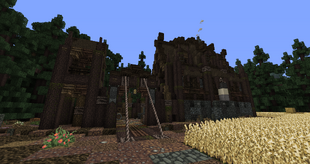 The longhall from the road
Add a photo to this gallery
Retrieved from "https://westeroscraft.fandom.com/wiki/Forrester%27s_Hyde?oldid=8879"
Community content is available under CC-BY-SA unless otherwise noted.