Things to keep in mind:

Your build should have:

Your build should not have:

There are exceptions, based on the location, size, and affluence. For instance, Lordsport has half timbered buildings that are canon. Wood isn't impossible to get, but focusing on stone gives the Iron Isles a distinct look over the rest of Westeros.

The Iron Isles in WesterosCraft are designed and based on Ireland as well as the Isle of Man, right down to the geography and castle styles. Some creative liberties have been taken though, as the Iron Isles are much more rocky and a lot more barren.

The Iron castles are primarily going to be styled after the plain, bare stylings of Norman castles found in Ireland (and other nearby countries).

Appropriate geometry is key for castles in the Iron Isles. The Iron Isles are ancient and were settled by the first men, long before Bran the Builder discovered that round towers deflected siege attacks better than square ones. Newer castles and keeps are going to lean more towards round towers, and ancient castles will use square or horseshoe shaped towers. Rectangular towers

Square or rectangular towers are easy to construct and give a good amount of usable internal space. Their disadvantage is that the corners are vulnerable to mining. Despite this vulnerability, rectangular towers continued to be used, and Muslim military architecture generally favoured them.

Round towers, also called drum towers, are more resistant to siege technology such as sappers and projectiles than square towers. The round front is more resistant than the straight side of a square tower, just as a load-bearing arch. This principle was already understood in antiquity.

The horseshoe-shaped (or D-shaped) tower is a compromise that gives the best of a round and a square tower. The semicircular side (the one facing the attacker) could resist siege engines, while the rectangular part at the back gives internal space and a large fighting platform on top. The large towers at Krak des Chevaliers and the gate towers at Harlech are good examples.

Pictured below is a small test towerhouse keep. It's not a great example of a final product, but does show off some special aspects of the Iron Isles. It's a worn down, tiny and plain keep, but with extra volumes added to keep it from looking like a big boring box. Note the battle scars on the wall corner. However that's a pretty extreme example of structural damage, and I wouldn't go that far except on special occasions.

The smallfolk of the Iron Isles create their houses (read: hovels) using sod roofs and stone walls. There should be no wooden roofs anywhere except on the rare middle class building here and there. Wood is scarce and would be used on more important things like ships and docks when sod roofing and stone walls work fine for housing. 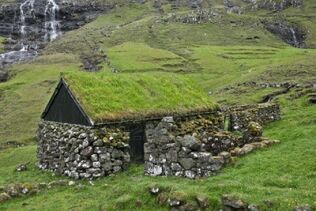 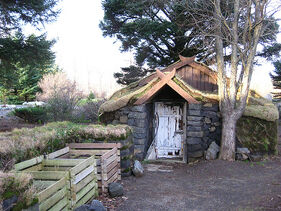 Add a photo to this gallery

Here's an example of this kind of house would look like in-game. Plain grass roofing looks really boring, so spice it up by adding some thatch and grass/ferns on top as well. Obviously it's up to you to take creative liberties to try and vary up the design (or even improve it if you can).

Retrieved from "https://westeroscraft.fandom.com/wiki/Iron_Islands_Style_Guide?oldid=8053"
Community content is available under CC-BY-SA unless otherwise noted.