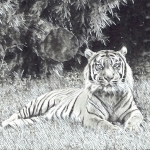 He was born and currently lives in Poland. His real-world name translates to Matthew (Matt) in English.

Bluetiger applied for builder rank on 5 October 2015 and after completing few challenges was approved on 14 October. His probation period as a new builder lasted until 14 November 2015 when he became full builder and was granted plot at /warp sirbluetiger. He participated both in Pumpkin Carving Competition 2015 and Ibben Holiday Contest (Christmas 2015 - New Year's Eve - New Year's Day 2016). On 23 November he started his first project, Starfall hamlet 6 at /warp sfhamlet6. It was completed on 31 December 2015, with help from Squidy and many other builders.

He and WhereRmyDragons built a Winterfell farmstead in July 2016. Bluetiger was the project leader of House Mallery in The Crownlands from 2016 to 2018. On 28th July 2016 Tiger became Wiki's Content Moderator. Due to various other responsibilities, Bluetiger was unable to finish Castle Mallery and surrounding lands, thus the project was orphaned.

In October 2018, WhereRmyDragons applied for Mallery on the forums, describing it as "an abandoned project previously led by my friend Bluetiger, who has given me his blessing for taking it over".

"Good luck with Mallery, I'm glad this orphaned project of mine has found a new leader. I'm sure Dragons' Mallery will be great". - Bluetiger on WhereRmyDragons' House Mallery Project

"As Former Project Lead of Mallery, Crownlands, I wish good fortune to WhereAreMyDragons, who "picked up the sword that Bluetiger let fall", to paraphrase Red Ralf Stonehouse from A Feast for Crows" - Bluetiger

As of June 2019, Dragons' Mallery is nearing completion. Although Bluetiger is still unable to visit the sever regularly enough to be a Builder, he has returned to editing the WesterosCraft Wiki.

Retrieved from "https://westeroscraft.fandom.com/wiki/User:SerBlueTiger?oldid=9529"
Community content is available under CC-BY-SA unless otherwise noted.